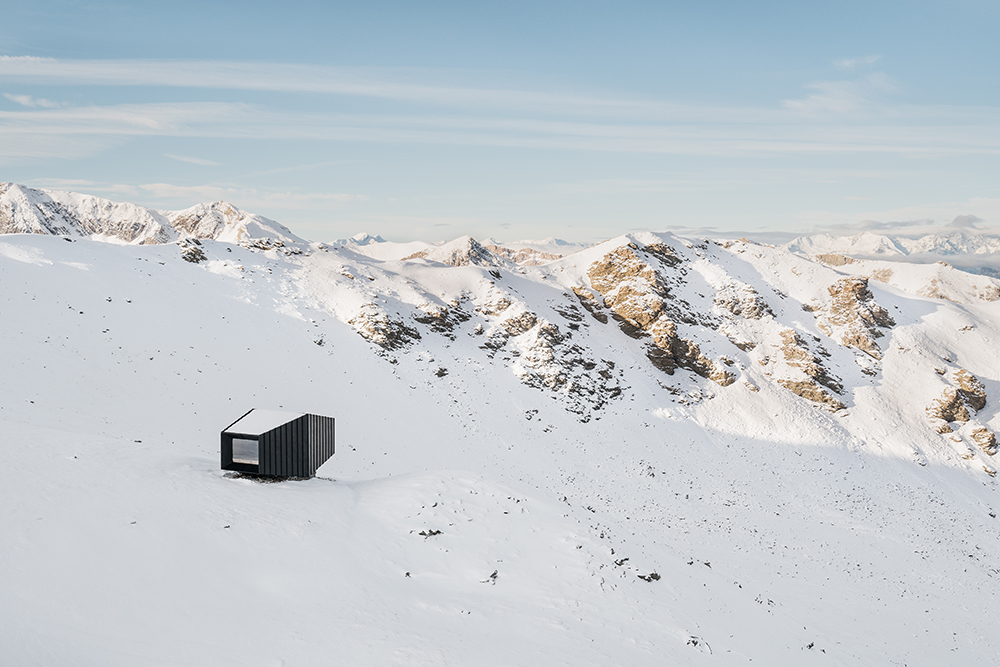 On the border between Italy and France, on the Dormillouse peak in the Cottian Alps, a bivouac for ski mountaineers and hikers has been created, designed by architects Andrea Cassi and Michele Versaci. The Black Body Mountain Shelter, also known as Matteo Corradini Bivouac, is characterized externally by a black aluminum coating, without reflections, so that it accumulates heat and does not pollute the surrounding landscape, while internally it is covered with soft wood. It is a detachable and modular bivouac, with a priceless view of the Thuras Valley and the mountains of the Ecrins massif. Magic Mountain Collective spoke with Andrea Cassi, designer of the bivouac. 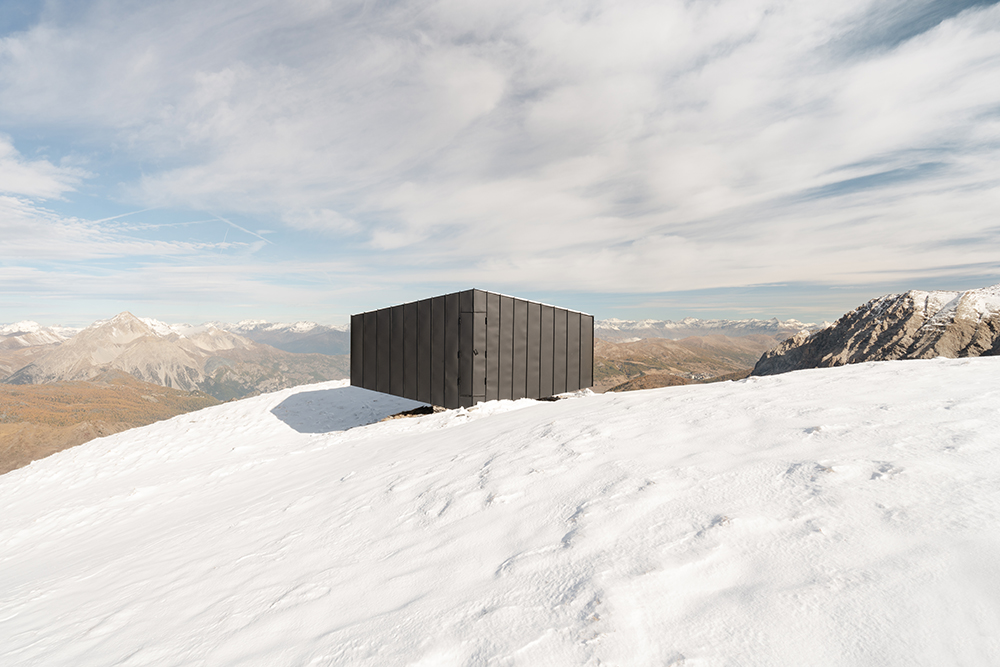 The snow has returned to cover the slopes on which the Black Body Mountain Shelter has found its place in the mountains. Maybe, even more than in summer, this bivouac seems a fundamental shelter from the cold. Is this true?

Yes, it is. The bivouac was created primarily to accommodate ski mountaineers in winter and spring. The area is very popular: the Dormillouse is a classic ski mountaineering ascent, one of the most accessible in Val Thuras. I’m not sure it is a “fundamental shelter”. I think that no bivouac is, not even the most remote ones. You know very well that there are different positions with respect to the anthropization, albeit light, of the mountain. We like to think that the BBMS is mainly a meeting place at 3000 meters above sea level: an interchange that on the one hand offers the possibility to live the mountain longer and more fully, on the other hand it attracts people who do not know this valley.

What kind of explorations have you done on the Dormillouse and to then move on to the planning of the bivouac?

I grew up on those slopes. Since I go to the mountains, so since childhood, I have explored far and wide the Thuras Valley. The feeling then is to go to your backyard. Michele, instead, in the same period explored the land of Scylla and Charybdis. From that point of view, it was a very personal encounter between different cultures. From the technical point of view, instead, we went up on foot on a beautiful autumn day with Paolo Corradini. While we were walking up Paolo told us the reasons for his proposal, the construction of a bivouac in memory of his son Matteo. From then on we started a series of technical inspections, involving mountain guides, in particular the great Alberto Bolognesi, the technicians of the Municipality of Cesana and others. The goal was to find a place that would allow a simple construction and that was close to the tip but without any impact on the skyline of the mountain. The position seems strategic to us: it allows you to find a shelter after climbing to the summit, it is barycentric compared to some longer routes. So it seems to us that it could work well as a support point, even if it is not on a route with particular difficulties. 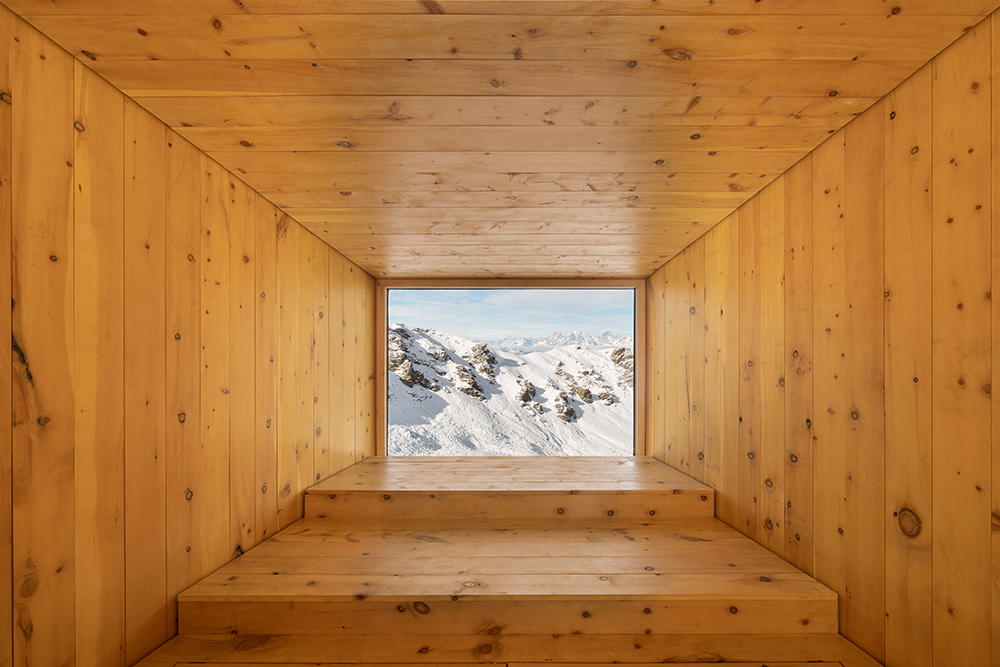 How would you describe the impact of this structure on the mountain environment?
When you add an element, a human artefact, to an alpine landscape (a ridge at 3000 meters) you always create an interference. We tried to make this interference as discreet as possible: an inhabited land-art work that from the inside defines unexpected points of view towards the natural landscape. The exterior, on the other hand, is thought of in relation to the surrounding environment made of dark rock ridges, from which grassy and stony slopes develop, completely covered with snow in the winter season. In fact a black prism, with hexagonal profile. Giò Ponti said that “black (empty) does not make architecture”. I don’t know, maybe it does. It seems to me more interesting to talk about environmental impact: a topic that today is necessarily at the center of the architectural debate. Also in this sense we have worked a lot with the aim of minimizing the ecological footprint: starting from the construction process and soil consumption to the total reversibility of the intervention. 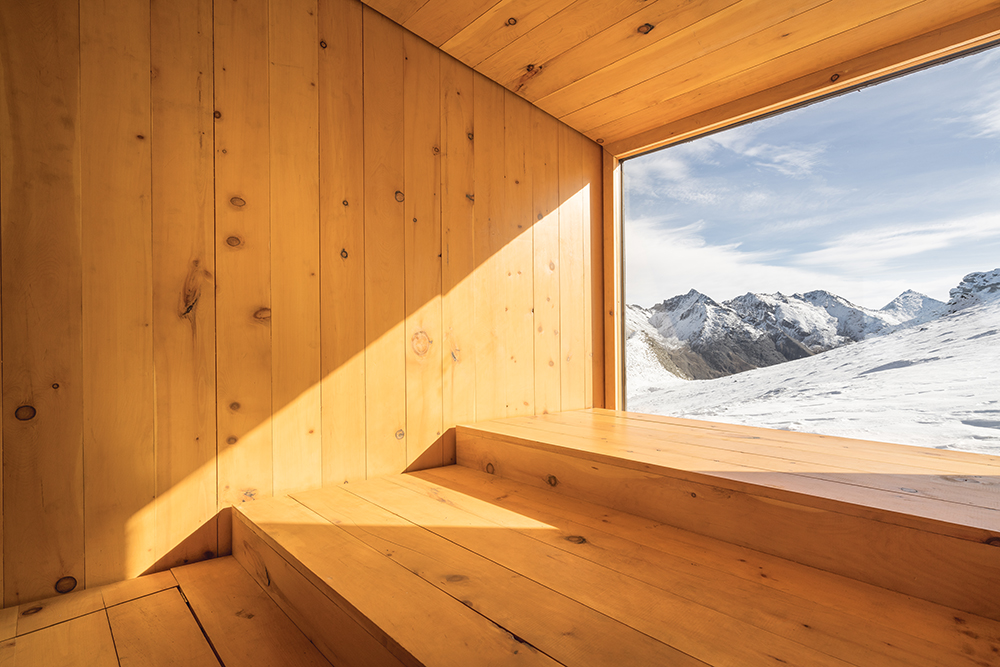 What and how many reactions on the bivouac have you received or intercepted on the social networks from ski mountaineers or simple hikers?

The thing that struck us the most is the amount of people who started to target the tip of the Dormillouse for their excursions. I think that the intervention, in a small way, is contributing to the development of sustainable tourism in the valley. The bivouac then has its own personal life on socials: an instagram account that has been a feedback collector for some time. It is another way to put together a community. Of course, as with every project, there has also been some criticism. I refer in particular to an article by Alessandro Gogna, on his blog, that accused us of not acting in the interest of alpine wilderness. It’s a position on the relationship between man and mountain that I don’t share, but that has its own foundation and its own betrayal.